Legend:
ERCA Events
Events from ERCA Members
Other Events in our Industry 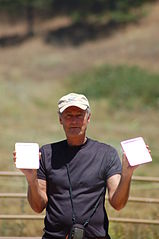 Karl Rohnke died on September 20, 2020, leaving his wife Gloree and two sons in Galena, Illinois. Karl lived the last years of his life with a rare disease and has now passed away after many struggles, setbacks and rays of hope.
He turned 82 years old and since his beginnings at Outward Bound North Carolina, he has been a trainer, ropes course designer and builder, writer, guest speaker and inspirer for over 50 years. Karl Rohnke has been a teacher, mentor and inspirer for me since I met him in 1992 at Project Adventure. Like me, thousands of people have had the chance to experience one of his workshops, seminars or "Ropes Course Programs".
He always left a lasting impression and moved so many people literally and figuratively. His energy, his humor, his creativity and his unconventional way of leading and communicating are still a role model for me today, and hardly a working day goes by without me using one of his warm-ups, initiative games or one of his Ropes Course exercises.

To his biography here an excerpt from the internet:
"Karl Rohnke was born in 1937 and graduated from Washington & Lee University (Lexington, VA) in 1960. After two years of military service in the USA, where he served as a medical technologist, he used this medical training to secure a position as a medical assistant in a community in California. This was followed by four years of teaching as an outdoor trainer in Southern California. Since that time Karl has been an important "player" in the field of experiential and adventure education. He was "Officer of the Watch" at Hurricane Island Outward Bound in 1967 and Chief Instructor at North Carolina Outward Bound until 1971. He left Outward Bound to become one of the founders of the Project Adventure program in Hamilton, MA, where he worked continuously until 1996. During his tenure at Project Adventure, he served as director, president and creative head of the company. Karl is also a founder of the High 5 Adventure Learning Center in Brattleborro, Vermont.
Karl has received two A.E.E. (Association of Experiential Education) awards: the 1990 Stratton Practitioner's Award, and in 2000 he gave the Kurt Hahn speech at the national A.E.E. Congress. Karl has written over 15 books related to the field of adventure education, including The Bottomless Bag Revival, Silver Bullets, Quicksilver and Fun 'n Games.
Karl continued to travel worldwide in his retirement to present workshops on the use of games and initiative problems in various educational applications. Most recently, he lived with his wife Gloree in Galena, Illinois" (source: http://karlrohnke.com).

In 2010 I was able to invite Karl to Germany for the first time and ask him to speak the keyword and give a workshop at the ERCA annual conference in Venlo. Many will remember those days.
When visiting the Olympic Museum in Cologne, Karl stopped long before the pictures of gymnastics father Jahn and his apparatus and equipment for physical training and saw here the beginnings of the history of the Ropes Courses.
His influence on generations of adventure pedagogues and our "industry" (he would never have called it that) is undoubtedly enormous. At a congress of the A.E.E. (American Association for Experiential Education) in the year 2000, all people who have been in contact with Karl or have read his books and applied his ideas were asked to stand up. Out of more than 1000 people only very few remained seated.

Thank you Karl and have fun in the sky or on the moon, because now you have climbed the "Ropeladder to the Moon". I would like to close with a quote from Karl Rohnke which describes his attitude well and which has accompanied and guided me since 1992:
"It‘s our responsibility as adventure trainers to remind them what happened, rather than preach about what should have happened“.
Cologne, 22nd September 2020
Written for ERCA e.V. by Bernd Rademächers, Honorary Member